Neymar’s latest injury comes at a particularly bad time for him, as the team is beginning to build momentum in Ligue 1. PSG has also already begun turning its attention towards next year and Neymar’s future, with many claiming that he’ll soon be on his way out of Paris.

The “Neymar Jr injury” is a recent event that has come at the worst possible time for him. He was injured in a match against Strasbourg and will be out for about 6 weeks. 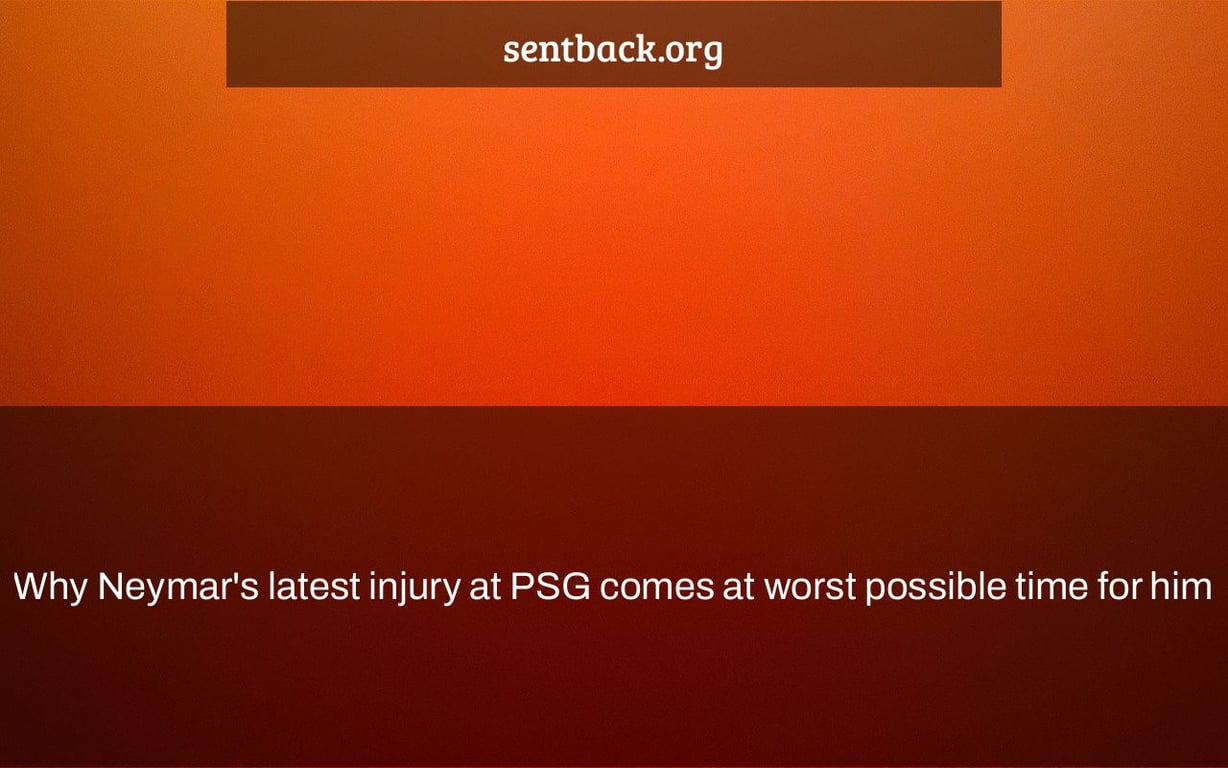 At the very least, he’s acquainted with the area now. Neymar will fly to Doha, Qatar, to rehab his left ankle injury at the Aspetar clinic, like he has done so many times since moving from Barcelona to Paris Saint-Germain in the summer of 2017. It’s the sixth time in the past four years that he’s had an injury that need such specialized care (thus the trip to Aspetar) and will keep him out for many weeks.

This time, it was a case of poor luck that caused it. Yvann Macon tried for a tackle during Sunday’s 3-1 victory against Saint-Etienne, missing both Neymar and the ball, but the Brazil striker trod on Macon’s ankle and twisted his own in the process. He’ll be out for up to eight weeks due to injury to his ankle ligament.

Neymar’s injury history is well-known. The first two were serious, resulting in metatarsal fractures in his right foot; the first occurred in February 2018, just six months after arriving in Paris, and ended his season (he missed 16 games in total), while the second occurred a year later, in January 2019, and he missed another 19 games before returning to play in the final three weeks of the season. Neymar hurt his left ankle a year ago, missing five weeks and five games as a result. When he tore his groin in February 2021, he was out for two months and nine matches, and he’d previously damaged right ankle ligaments while playing for Brazil, which kept him out for three months (June-September, 2019).

In total, Neymar has missed 91 matches for PSG due to these ailments and other minor niggles. It’s always been a topic of discussion, particularly for a player who was seldom injured throughout his four years at the Camp Nou, missing just 29 games.

So, what exactly happened? He’s growing older, for starters. Neymar is 30 in February, and given that he began playing professional football at the age of 16, he has already endured 14 years of hard work, intensity, hits, kicks, and overall discomfort. He’s definitely already played too much, and his body is more vulnerable than ever. Injury after injury isn’t helping matters.

If we look at Neymar’s history of injuries, we can see that they often affect the same places of his body: the foot, metatarsal, ankle, and groin, all of which are locations that never completely heal and are more likely to be injured again. Of course, this is a concern, and PSG is working to find a solution to avoid these injuries as much as possible. They must do all they can to care for Neymar’s body, and he must assist them as well. For the No. 10, all the unseen effort — things like recuperation, relaxation, and nutrition — will be more vital than ever. After all, he’s approaching a pivotal point in his career.

Despite the fact that Neymar’s injury on Sunday was a fluke, the Brazil international will be out until at least February. Getty Images/Marcio Machado

Neymar ultimately signed a new deal with PSG in May, which would keep him at the club until 2025, with the possibility of one additional year. That’s a lot of time, and he’ll need to stay in shape to make the most of it. He’s well aware of it; he apparently did not like the criticism he received throughout the summer for his excessive weight. It took him a long time to regain his peak fitness, as well as to be the greatest version of himself on the field. The injury occurred against Saint-Etienne, just as he was hitting form.

– Watch ESPN FC Daily on ESPN+ (available in the United States only) – Don’t have ESPN? Get immediate access

Could this be a wonderful chance to try something new? PSG manager Thomas Tuchel could simply replace Neymar with Angel Di Maria, but now that Sergio Ramos is back, he may attempt a 3-5-2 formation with Kylian Mbappe and Lionel Messi up front — the No. 3 and No. 1 attackers in ESPN’s FC 100 for 2021, respectively. Or a flat 4-4-2 with Messi up front alongside the French star, or even a 4-4-2 with a diamond midfield and Messi behind Mbappé and Mauro Icardi.

Pochettino and PSG have a lot of alternatives now that Neymar is forced to watch from the stands and observe how his team performs without him. Neymar will undoubtedly be missed, but his teammates are used to it.

The “neymar injury history” is a blog post that discusses the latest injury that Neymar has suffered at PSG. The writer believes that this comes at the worst possible time for him.